Because we have to extend the sharing space between performance arts and visual arts, Nanterre-Amandiers welcomes every season since 2014 the work of many plastic artists like Aernout Mik, Christine Rebet, Fabrice Gigy, Virginie Yassef, Kris Lemsalu, Roman Signer…

As part of this programme called “Poltergeist”, films, sculptures, installations or performances surround the areas of the theatre (hall, scenery workshop, stages) and make one with the theatre’s life. 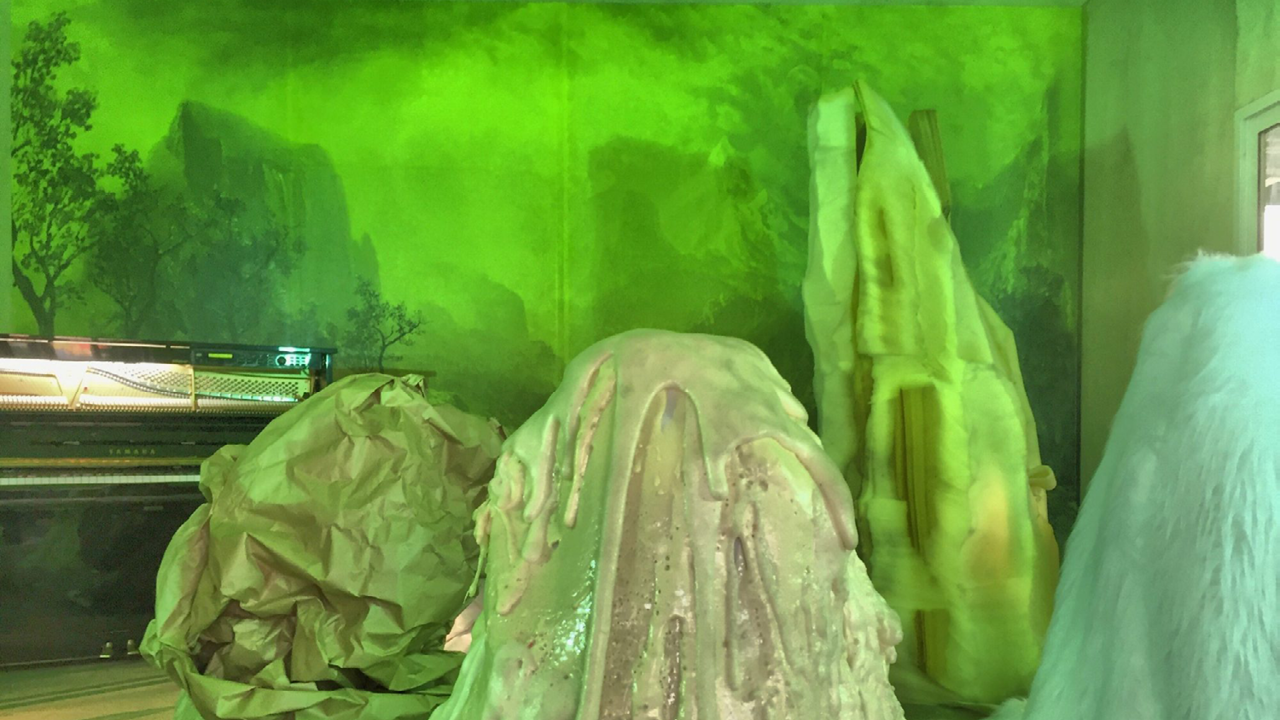 Animated installation, Microcosm is a doomsday scenery where only machines are left to testify what was humankind. It is the idea that of real human feelings world simply embodied by automatons. A lifeform that go without the living. In June 2019, with this installation, Philippe Qesne won the price of the best country pavillion during the Quadriennale de design et d’architecture théâtrale of Prague.

Microcosmwill be presented at the Musée d’Orsay from 12th to 20th of December 2020. 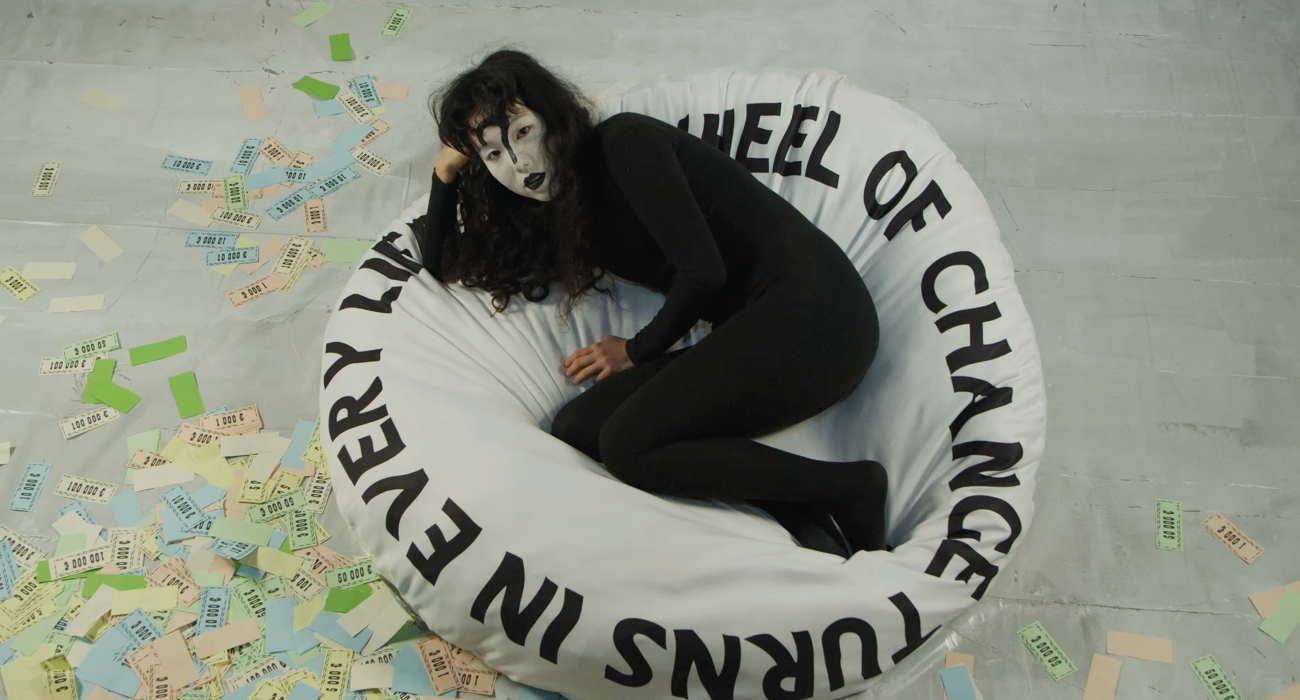 The work of Louise Siffert find its source in modern management theories, well-being at work and business coaching specific to start-ups and tertiary sector, but also in the burlesque performance, one-man show, the Baroque aesthetics and the New-Age. Her performances display hybrid characters between manipulative guru, conformting coach and living sculpture who, thank to the over-exploitation of their langage and behavioural codes, create an awkward sensation revelating the imperceptible violance and alienation that goes in the modern workplace. 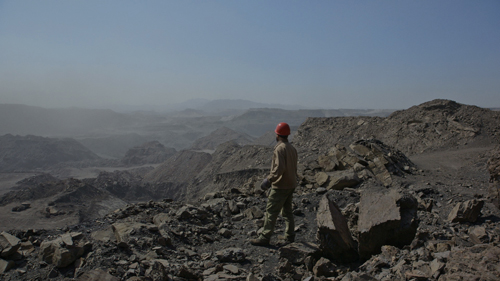 Pauline Julier is an artist and filmaker, trained at the École Supérieure de la Photographie d’Arles and at Sciences Po, Paris. Her films have notably been presented at the Rencontres internationales Paris / Berlin / Madrid, at the Festival Hors Pistes at the Centre Pompidou in Paris, at the Loop Festival in Barcelona, at the Visions du réel Festival in Nyon, at the Tokyo Wonder Site, at the Gaité Lyrique in Paris, at the Internationale Kurzfilmtage in Oberhausen, at the Centre culturel suisse in Paris or at the Istambul Biennale.

On the 23rd of November, 2019, she will present at Nanterre Amandiers her last film, Naturales Historia, with Bruno Latour, Philippe Descola and Jun Wang. The projection will be followed by a meet-up between the filmaker and dramatist Camille Louis. 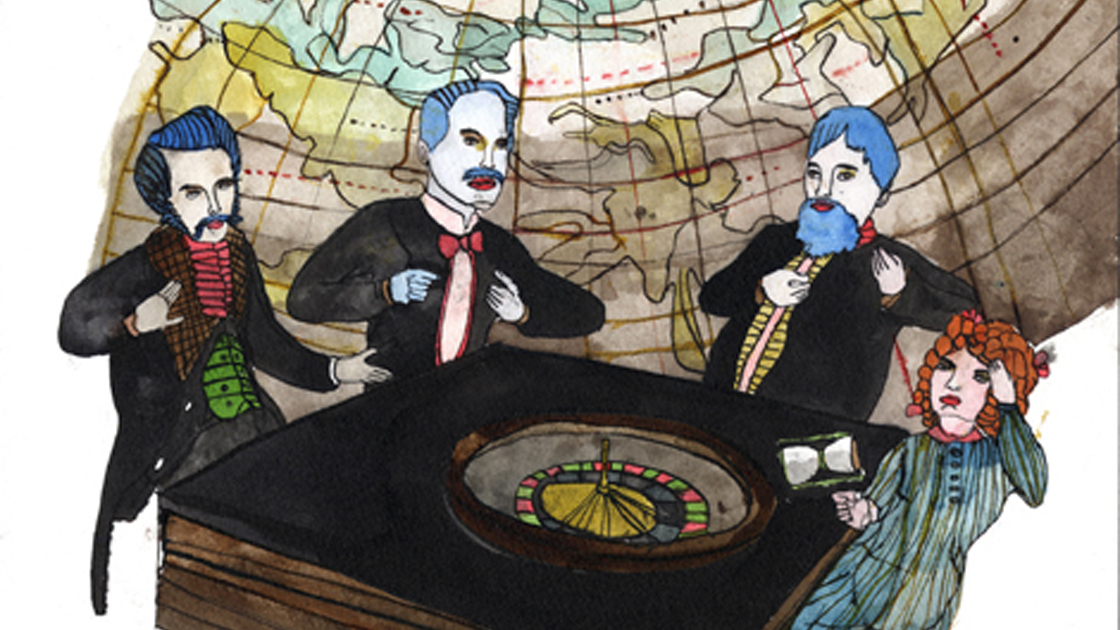 The world of Christine Rebet (born in Lyon i 1971) who lives and work in New York, is suffused with blended dreams of psychoanalitics and literary references. In her works, she combines drawing, animation and cinema. Holding a degree from the College of Art and Design de Central Saint Martins in London and The Columbia University in New York, the artist exhibited and presented her works in many international festivals. The animations hand-drawn by Christine Rebet (shot in 16mm and 35mm) use optical illusions and pre-cinematographic entertainements to highlight the similarities with deceiving political measures and the current media sphere.

In 2018/2019, she presented a cycle consisting in 7 short films at Nanterre-Amandiers, going along with the theatre’s programme through the season. 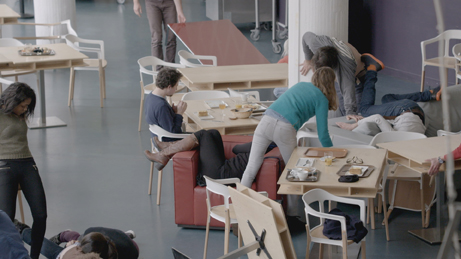 The work of Dutch plastic artist and video maker Aernout Mik blends video, performance, sculpture and architecture. Exhibited at MoMA in New York in 2009 and at the Jeu de Paume in Paris in 2011, the artist also represented Netherlands at the Venice Biennale in 2007.

He cosigns Daytime Movements, a film installation where his universe meets with choregrapher Boris Charmatz’s. Dance film? Filmed dance? Or phanthom choregraphy, seeking in movement nature itself the blurry matter of its imagination? This installation places us on this boundary: in this “dance of the day” where bodies disorder involves in this daily environnement, every gesture hides or reveals other signs charged with a disturbing strangeness…

Daytime movements has been presented along performances of 10000 gestes of Boris Charmatz in January 2019. 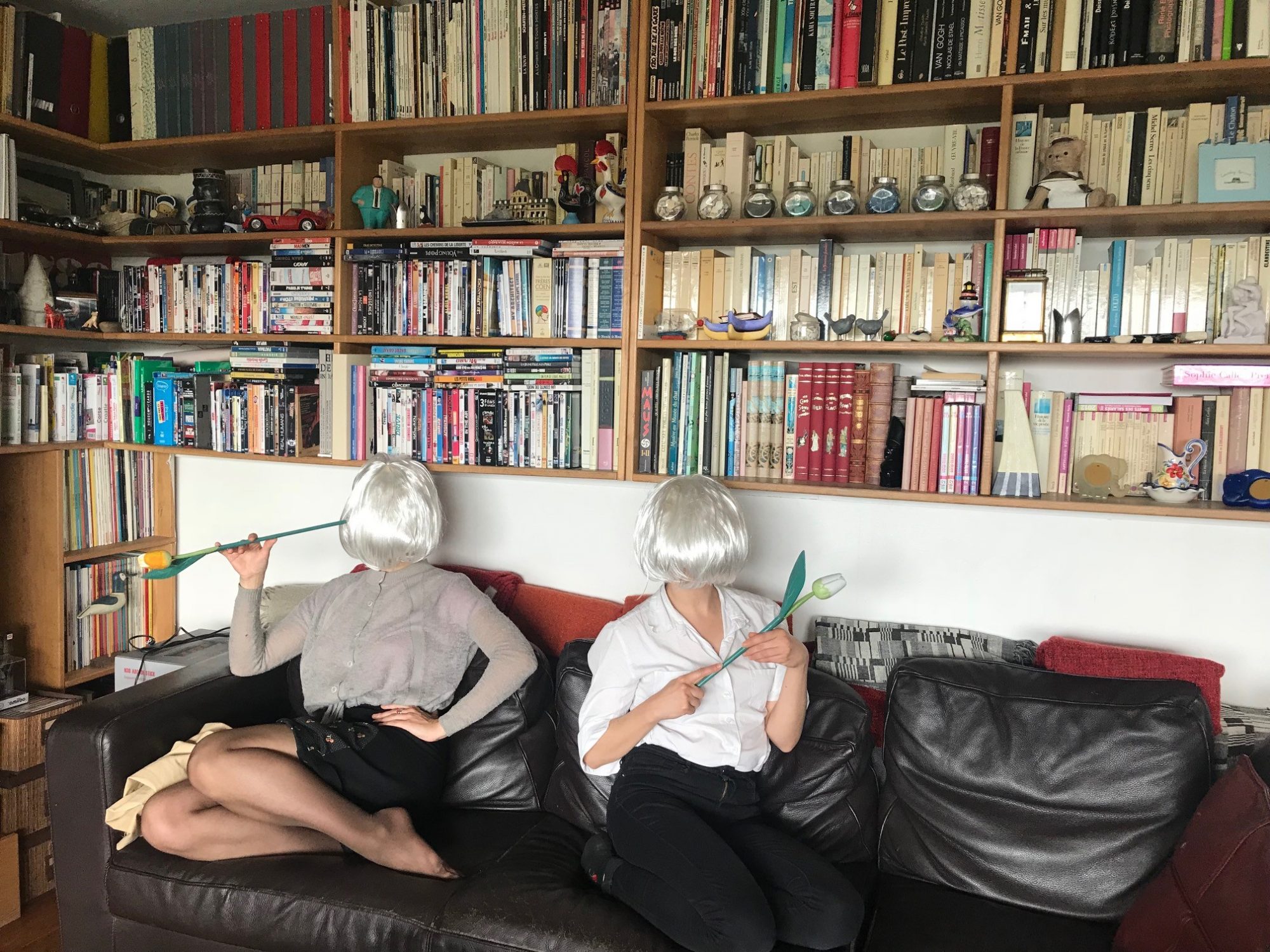 In 2017, artist Anne Le Troter wanted to do plays in homes. She wants something intimate and restricted, in parallel of a research she is leading on literature produced by sperm banks around the world. Anne Le Troter then invited Charlotte Khouri, who uses performance through her scenery and texts. Together, they think and put Le Théâtre chez l’habitant – Théâtre d’habitation up, by taking the road of science-fiction. Thanks to the hospitality, for a night, of inhabitants, they present in homes a form of drama where the question of fiction and dysopia sted onto the domestic area. 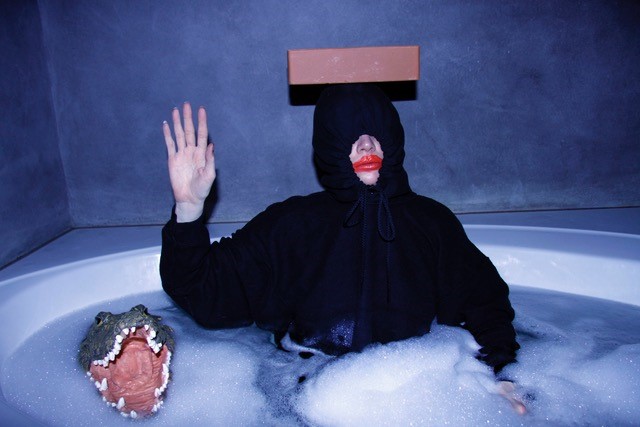 Born in 1985, Kris Lemsalu lives and works between Berlin and Tallinn. This Estonian artist studied at the Arts Estonian Academy in Tallinn, the Design School of the Danish Royal Academy of Fine Arts of Copenhagen and the Fine Arts Academy of Vienna. Kris Lemsalu mixes in her works traditional ceramic techniques with animal material (leather, wool, fur…). The artist’s works, both dark and scary but also fragile and lush are exhibited all around the world.

Lemsalu presented her installation Star in the theatre’s hall in December 2017, during the Estonian Weekend. 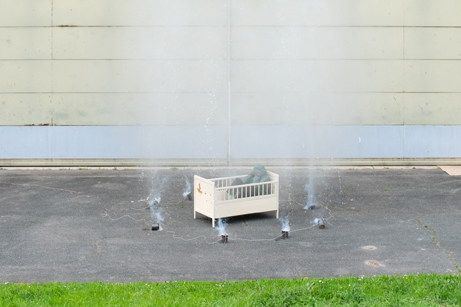 Since the beginning of the 1970s, the works of  Swiss Roman Signer activate and reactivate paradoxes. Microperformances or non-events that result from every of his “actions” interogate the performance economy, the idea of yield, the obsession with efficiency and our establishment into functionalism. Often described as a pyrotechnic artist or “artist of the explosion”, Signer invented a format beyond labels, that involves equally performance, sculpture, drawing, installation, photogrpahy and video.

Invited by Nanterre-Amandiers and the Centre culturel suisse of Paris, Roman Signer presented in May 2017, as part of the Mondes possibles festival, his performance Bett. 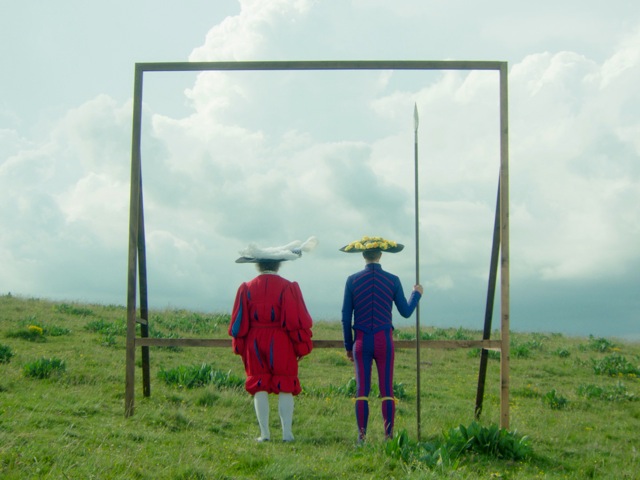 Born in May 1968, Martin Le Chevallier is a plastic artist and director. He develops a political work made of films, diversions or contextual interventions. He got audited by a consulting firm, made a procession in Brussels to present a miraculously saved european flag, secured a pond in the Tuileries thanks to remote-controlled little police boats and arranged behind a shop window rows of seats turned to the street, suggesting the city is a theatre.

In his films or video installations, he invents a singular writing. Loyal to an aesthetics and to a still-frame humour, he sets games of detachement inspired by drama norms: a character represents the people (“the overly indebted american”, “the amazonian land clearer”…), two other depict the army or get involved in some action to comment it. Some others watch the film of their own story to deceipher it better. This results into representations of the world combining a documentary’s precision and a fable’s fantasy. 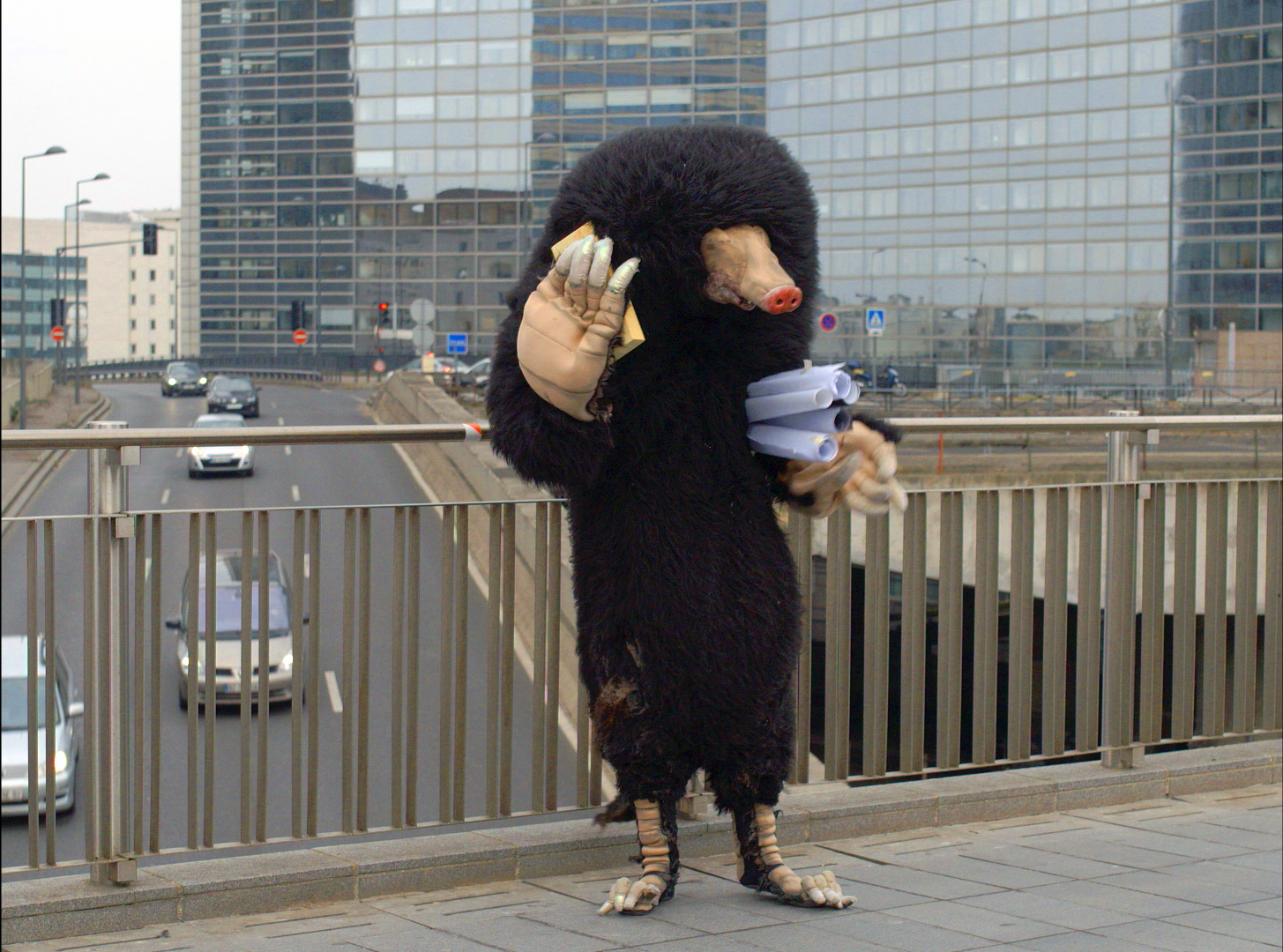 Jordi Colomer is born in Barcelona (Spain) in 1962. He currently lives and works between Barcelona and Paris. His work, marked by a strong sculptural sense, unites multiple disciplines and most importantly photography and video as well as their staging in the space of exposure. The creation of these situations often come under a form of “dilatated theatre” that allow the audience member to evaluate his relation with the representations and with the role he plays himself in them and by facing them.

He presented in 2016 at Nanterre-Amandiers Welcome to Caveland ?, a TV film directed with the École Nationale Supérieure d’Architecture Paris-Malaquais. 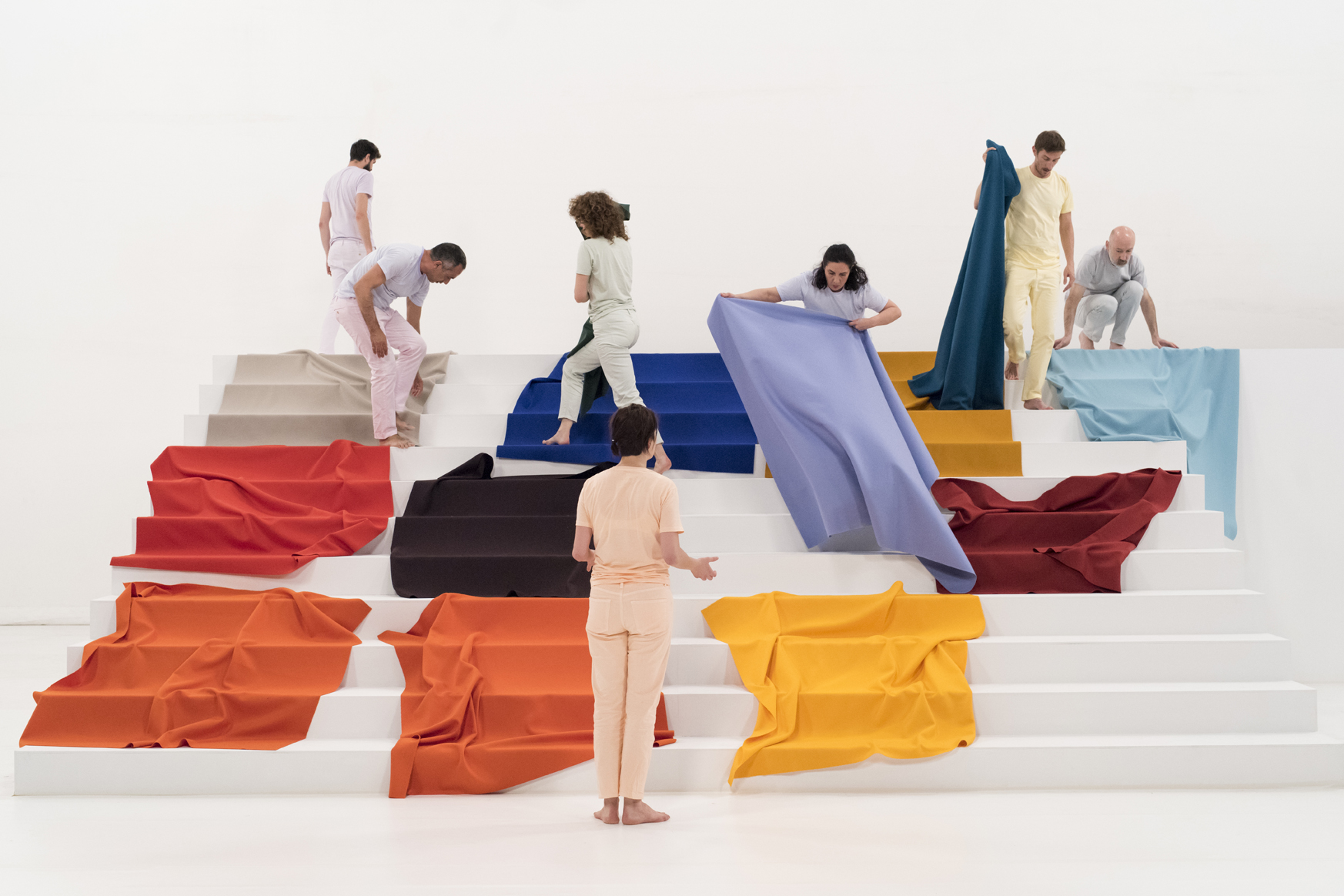 It has a Golden Sun and an Elderly Grey Moonis the first film that Ulla von Brandenburg dedicated to colour. It is a movie she shot on the main stage of Nanterre-Amandiers. It is long sequence shot, without editing, a danced film. “The first idea was to make a colour film, contrary to the former ones. At the moment colour entered in one of my films, I decided that the film would be dedicated to it. The dancers are in a white space, each of them holding a tinted, birght coloured sheet.” The stage area is structurated by two large white stairways that go up to a platform. The figure of the stair is a recurring pattern in Ulla von Brandenburg’s language, tilted in its architectures, it’s also the first step to the story. In this film, it is a way to represent, physically and symbolically, the ratios of power between people and the power hierarchy. For this occasion, Ulla von Brandenburg calls dancers for the first time. They manipulate coloured fabrics: the fabric and the colour are the subject of their exchanges and their ceremonies. Their movements remind us the memory of ancient rituals, their bodies crossed by instinctive rhythms, some sort of collective state of consciousness, recalling the choregraphic forms of the eurythmy and modern expressionist dance.

It is in 2016, during the Welcome to Caveland festival, that Ulla von Brandenburg presented It has a Golden Sun and an Elderly Grey Moon at Nanterre-Amandiers. 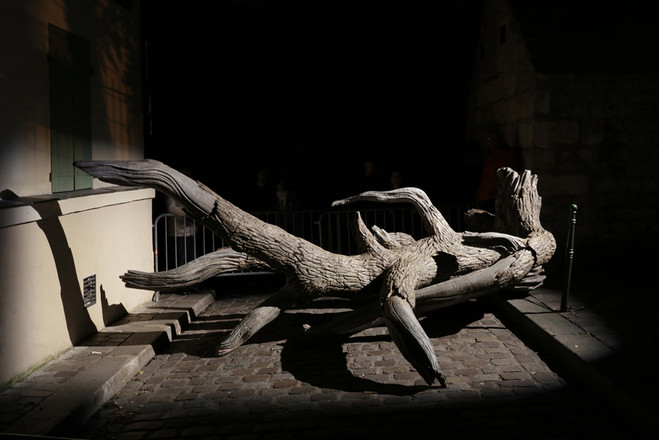 For her installation L’Objet du doute (2013, Courtesy Galerie G-P & N Vallois), Virgine Yassef imagined a fake tree uprooted to block the Rue des Cascades during the Nuit Blanche 2013, responding to the Parisian barricades built during the Commune of Paris. The tree, blocking the path, seems still but by getting close to it, we see a subtle movement: it tries to get up then falls abruptly, as a final breath. Nature in Virginie Yassef is myterious and worrying: the tree is dying but slightly alive, it’s a “living dead” tree. In this scenography close to a horror film, the artist breaths life into a fantastic dimension to this sculpture that becomes a real animated character, calling in the audience’s imagination.

L’Objet du doute has been displayed in the hall of the theatre during the 2016/2017 season. 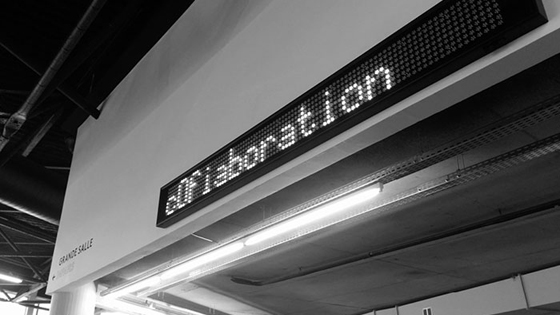 As if it was dysfonctional, a big billboard with white LEDs presents instable letters and hesitating words. This device of communication supposed to display clear informations turns out to be stammering, looking for words and incitating us to do the same, contextualised words, the same that participate to defining Nanterre-Amandiers’ programme and activities.

This illuminated sign is exhibited above the theatre’s counter since 2016.