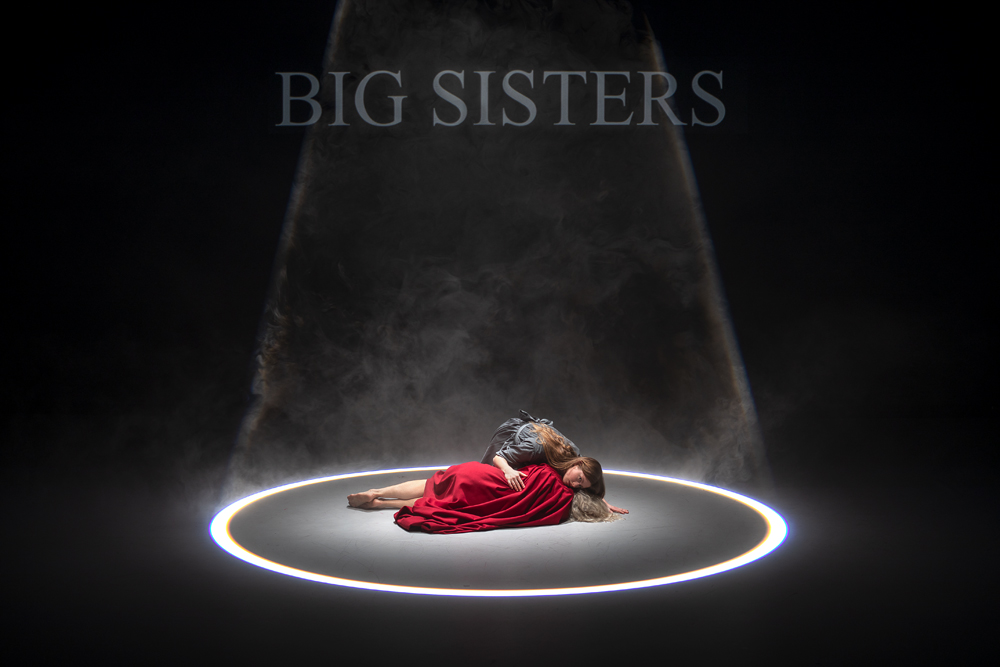 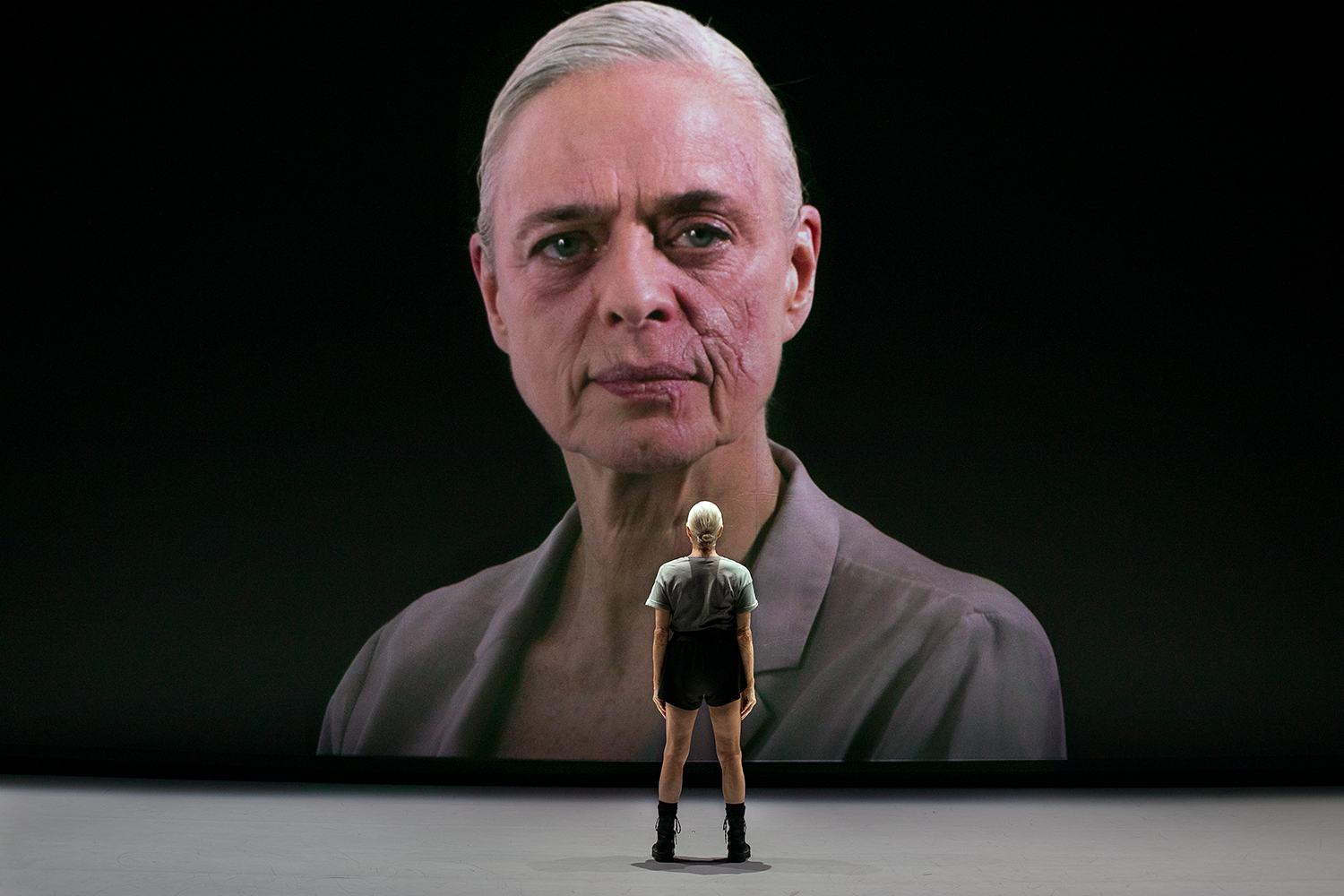 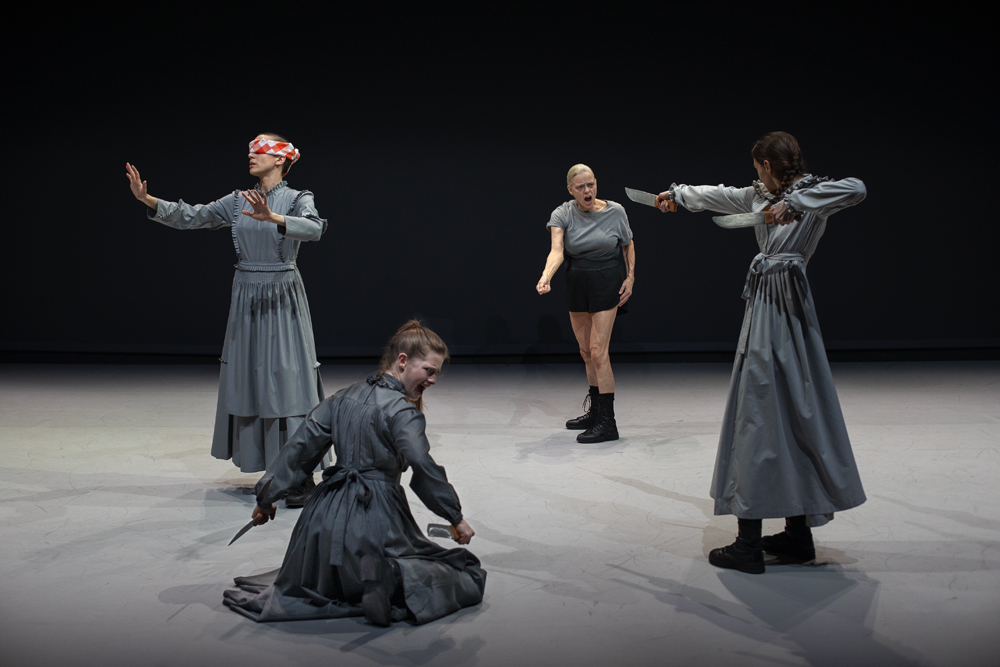 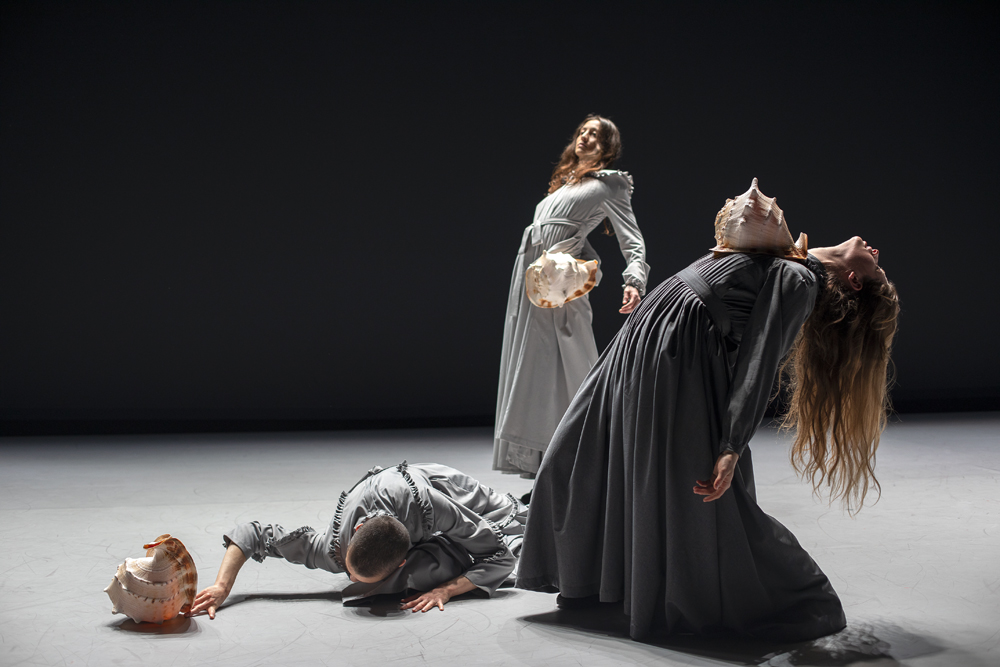 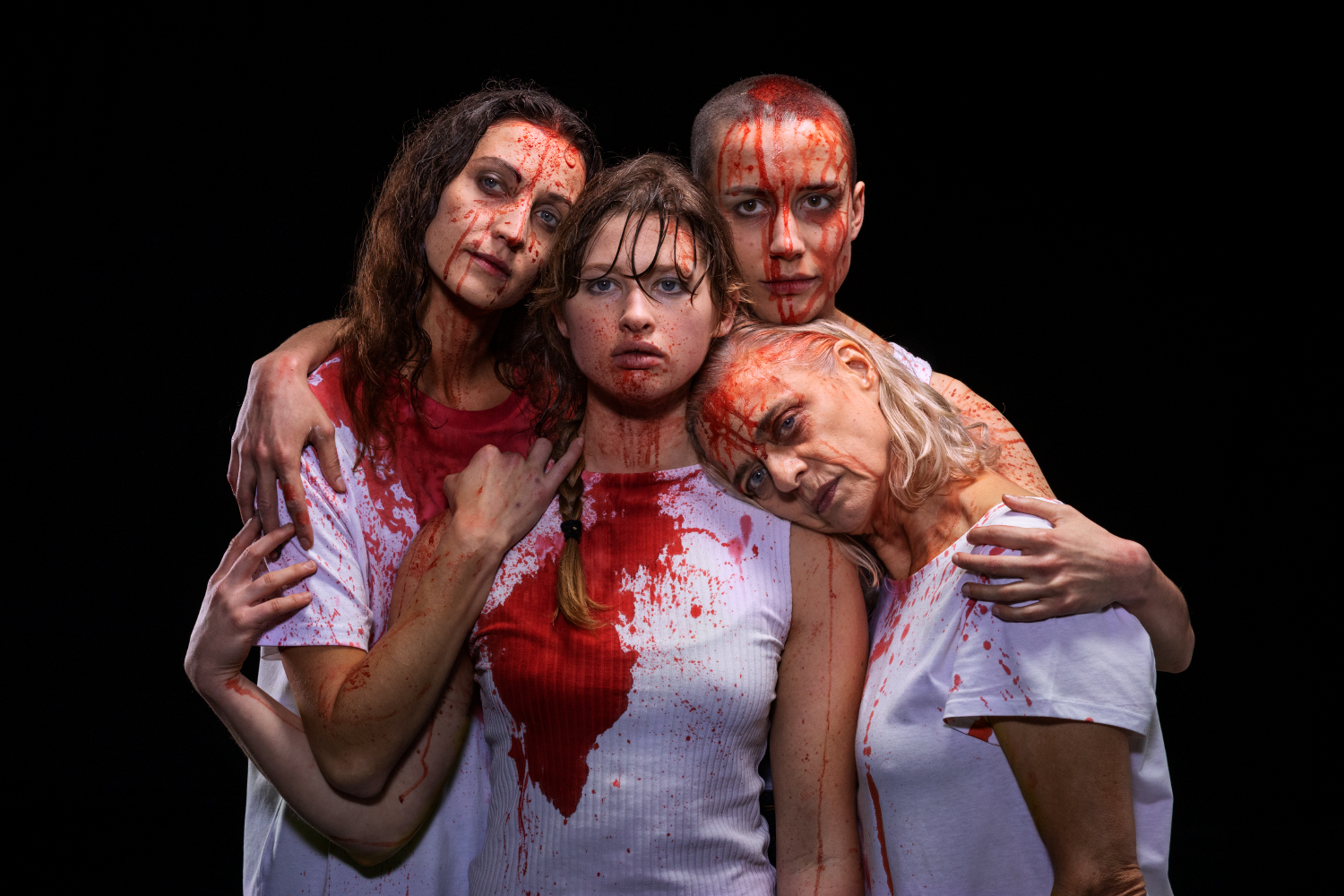 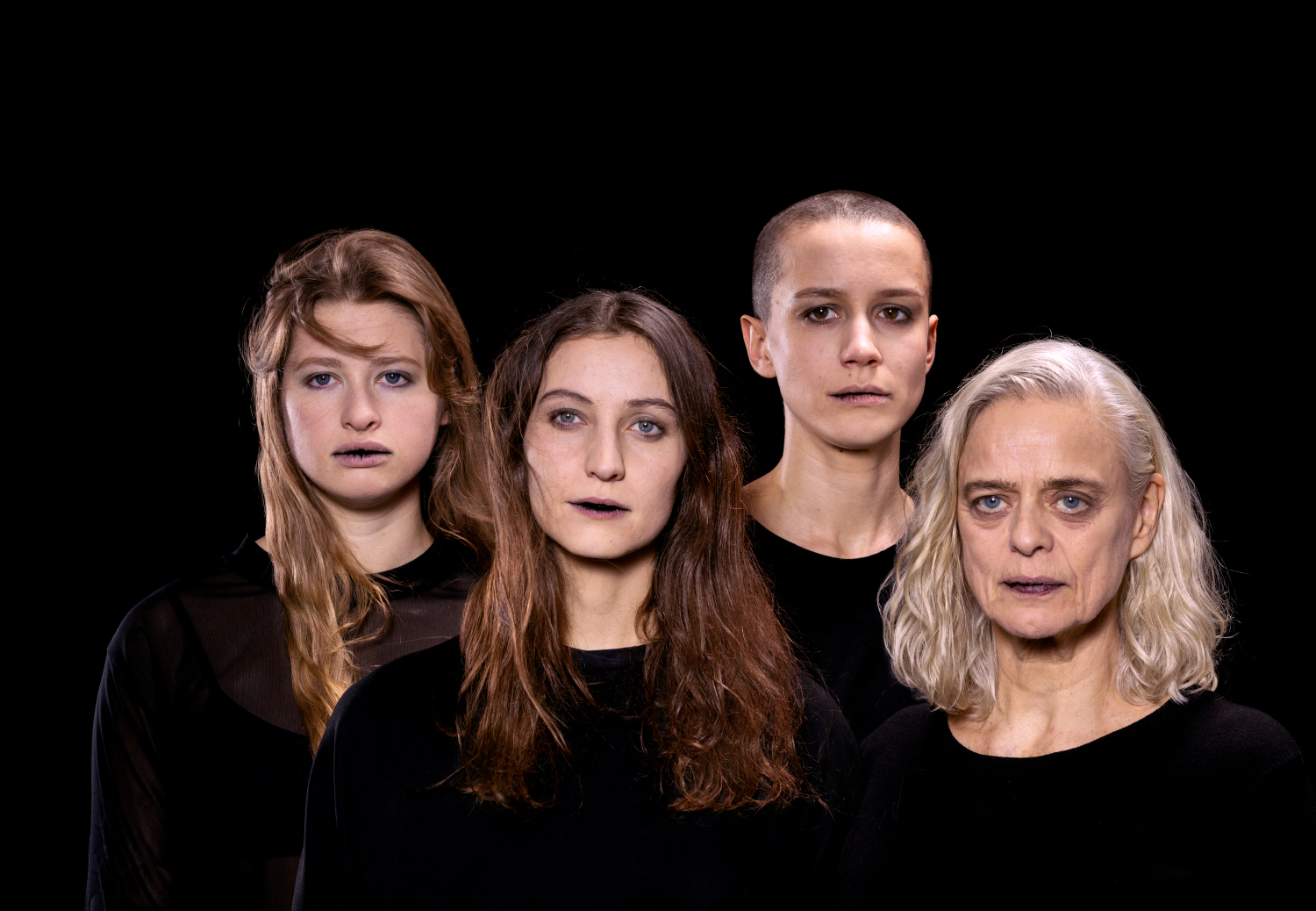 Following Affordable Solution for Better Living – a genuine domestic drama in which a man builds up his male identity by assembling an Ikea bookshelf – Steven Michel and Théo Mercier continue to explore gender, biopower and domesticity with BIG SISTERS. The play was conceived and designed for four dancers aged 23 to 65, including Laura Belgrano, Lili Buvat, Marie de Corte and Mimi Wascher. Envisioned like an experimental film, BIG SISTERS is a performance act unfolding like a filmic and kaleidoscopic take on women and their representations, juxtaposing fragments of self-portraits, staged portraits, science fiction and historical reenactments.
By turns ghosts, spaceships, captains, missiles and planets, the bodies of the four women are time-travel capsules. Through those political and poetic bodies engaged in a thousand-year-old liberation war, BIG SISTERS also attempts to shed light on the complex choreography of perspectives, fantasies and projections at play in the dramatizing of female bodies.
In the modern kitchen, under the moon of a great Sabbath, in damp woods or inside cybernetic networks, BIG SISTERS wavers between bloody battle, festive ritual and gleeful celebration of vital energy, encouraging everyone to acknowledge their own power and wield it. 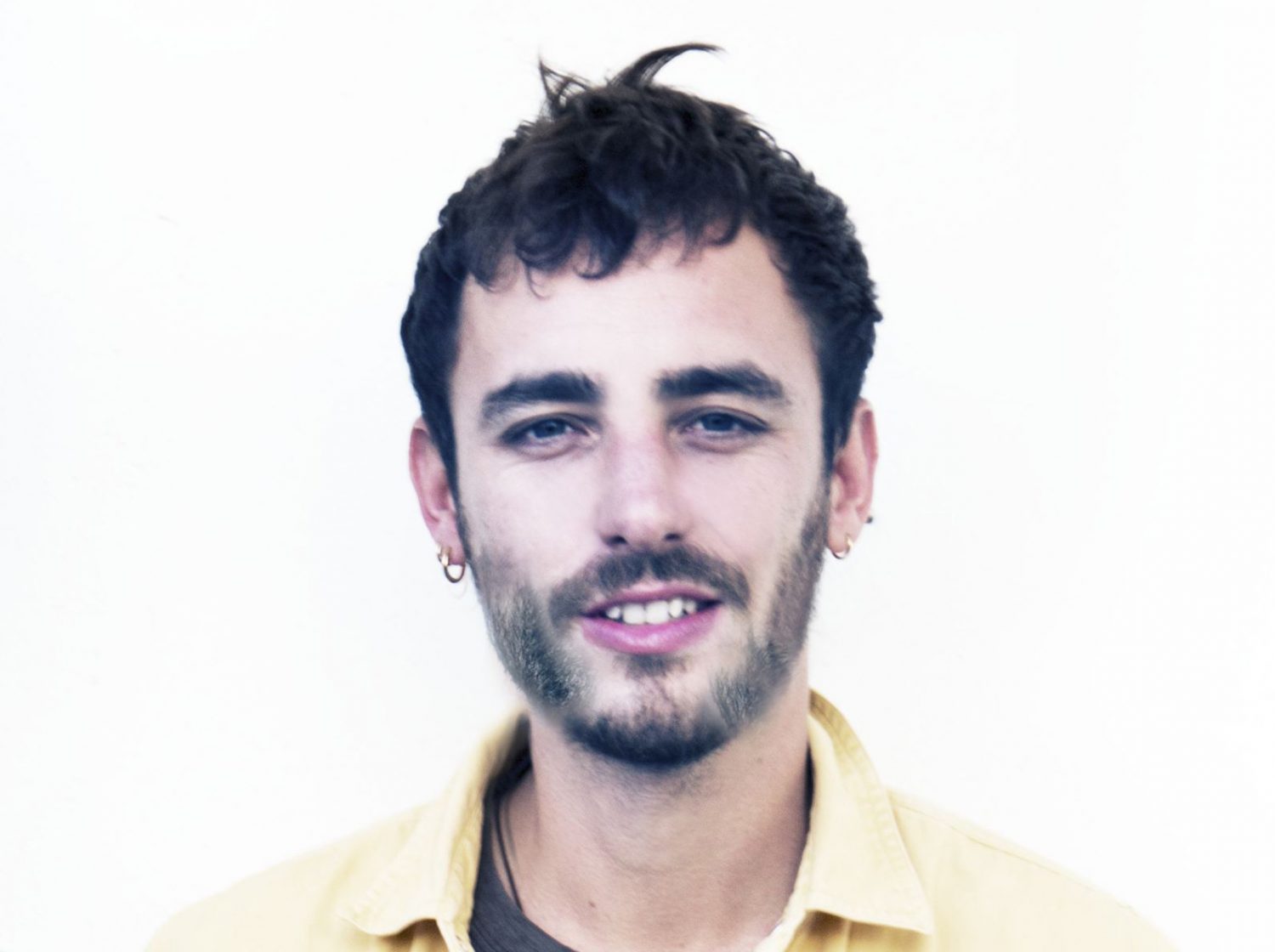 The work of Artist and Stage Director Théo Mercier forms a critical inquiry at the intersection of anthropology, ethnography, geopolitics and tourism. Between choreographed performance works and the exploration of diverse materials, he is both a creator and a collector, involved in a rich dialogue between past, present and future, between animate and inanimate, truth and lies, artisanal and industrial, sacred and profane, real and imaginary.

Most of Mercier’s pieces turn on the anthropomorphisation of objects – whether they are found, assembled, in collage or grafted together. He tends to work in series, forming communities of pieces – roughly grouped as young or old, male or female. At the heart of these, he reveals and invents a mobile social hierarchy, as in the series of totems produced in Mexico – a tremendous place of inspiration and creation for Mercier – entitled Craft Thoughts Wood Songs or Nowhere Bodies (2015). This recent work emphasizes the importance of movement for Mercier. The pieces deployed in the installations convey movement through the way they were made; the wood and ceramic materials were worked on using a potter’s wheel built by the artist himself. Similarly, the very stools which Mercier sat on in the studio are used as pedestals for his objects, thus including the whole process of creation in the finished work.

In the series Back to Basics and Gender Studies (2015), Théo Mercier introduces new elements to African dance masks – such as modifications to ears and eyebrows, peculiar to Papua New Guinean masks – and grafts on to them long, curving PVC noses. The snaking forms of these noses symbolise the undulation of dancing bodies, thus situating these objects between masks and instruments. By producing and collecting such hybridity – polymorphic, polyvocal, ambiguous, of uncertain origin and use – Théo Mercier gives shape to a very distinct exoticism: transcultural, transgeographic and transtemporal. This is underlined through the staging of a display which constantly seems to change from a cabinet of curiosities, to a plundered hoard, to a warehouse, to the artist’s studio, to a group photograph… Between real and imagined anthropology, the artist’s approach is like that of an explorer bringing back objects from real or fictional worlds, as evidence of journeys that may or may not have happened.

Théo Mercier is reviewing the history of mankind and its productions, which he compares to the review made possible by the Internet. He reminds us, however, that La possession du monde n’est pas ma priorité [Owning the world is not my goal] (2013), an exhibit displaying a set of three hundred false rocks made for aquariums, and collected on his travels around the world. An astonishing imaginary geological collection, these rocks symbolise the creation of a fictionalised nature by a culture of mass (re)production. Just as he likes to explore plurality in the status of his objects and his displays, Théo Mercier constantly plays with the confusion, even the loss, of the artist’s presence in the creation of a work, a game that also appears in his performance piece Radio Vinci Park.

At Nanterre-Amandiers, he presented two theater plays : La Fille du collectionneur (2017) and Affordable solution for a better living (2018), a solo piece created with Steven Michel, for which the pair has received a Silver Lion at La Biennale di Venezia 2019. 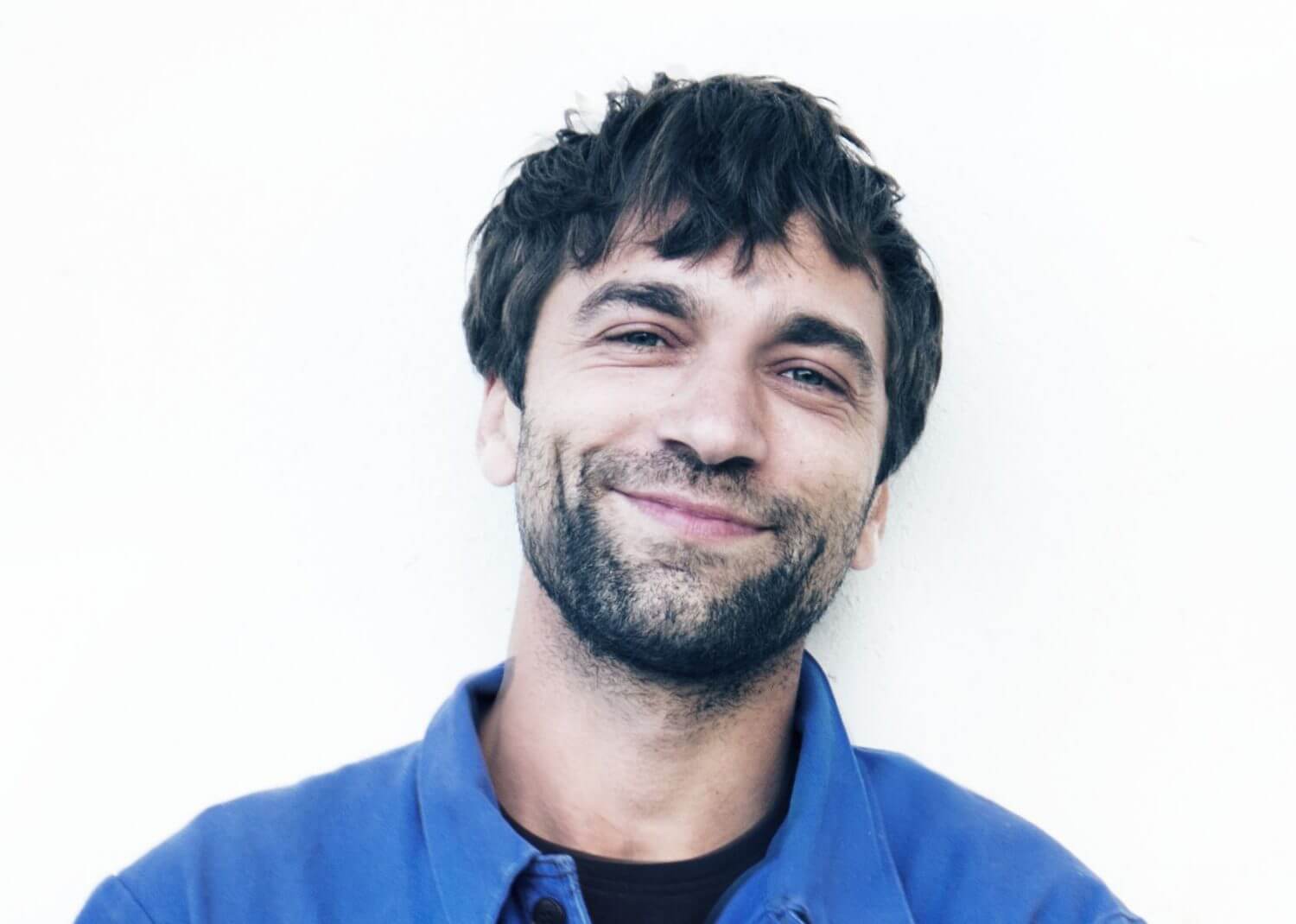 Steven Michel (France, 1986) studied mime and circus from an early age, and dance and percussion as a teenager, before settling in Brussels in 2006. He trained at The P.A.R.T.S. dance school (Performing Arts Research and Training Studios), directed by Ann Teresa De Keersmaeker, graduating in 2010.
In 2009, Steven was in residence in Johannesburg (South Africa) where he performed the dance duo ± Even but Odd, in collaboration with Nicholas Aphane. Their work focuses on rhythm and body percussion. The duo was performed in several theaters in Europe, as Steven’s solo piece The Desert of Milestones (2010). The starting point of this solo was the idea of composing musical scores and body percussion rhythms that take the viewer on a fictional journey of images and sounds. With the support of the DEPARTS network, Steven moved to MDT and Dansenhus in Stockholm in 2012. He collaborated with dancer / choreographer Marcus Baldemar on their next production, Model, in reference to the French filmmaker Robert Bresson. In this research, they used the vocabulary of cinematography to develop a performative and choreographic system.

Steven has worked as an interpreter with Choreographers, Directors and Filmmakers such as David Zambrano (Shock), Anouk Van Dijk and Falk Richter (Rausch, For The Disconnected Child), Lukas Dhont (L’Infini), Daniel Linehan (Being Together Without Any Voice) and Maud Le Pladec (Democracy, Professor), as well as visual artists Théo Mercier and Sarah & Charles.
Since 2012 he has collaborated as an interpreter with the Belgian choreographer Jan Martens (Sweat Baby Sweat, Victor, The Dog Days are Over, The Common People).

In 2014, Steven began a research project based on the theme of Audio-Vision, with the support from the Flemish authorities. His ideas have led him to explore the “rhizomatic” dimension of the audiovisual relationship, as a mental stimulus but also as pure sensory experience. In 2016 he produced the solo They Might Be Giants (2016), currently on tour. For the scenography he collaborated with visual artists Sarah & Charles. They Might Be Giants brings the viewer to a space where music and images excite the imagination and overturn perceptions. The solo piece questions the relations between the artificial, the natural, the animate, the inanimate, the immaterial and the monumental.

Steven is currently preparing a series of performance laboratories, open to artists from different disciplines. The methodological diversity of the research builds bridges to new areas of knowledge and experience. His goal is to not limit himself to a single discipline or tool, but to experience different roles and approaches, to explore diverse objects and to blur the boundaries between modes of expression. He continues to explore and to play with correspondences evoked by his research, such as: fiction and science; miniature and monumental scales; harmony and chaos; major modes and minor modes; the eye and the ear; the analogue and the digital. 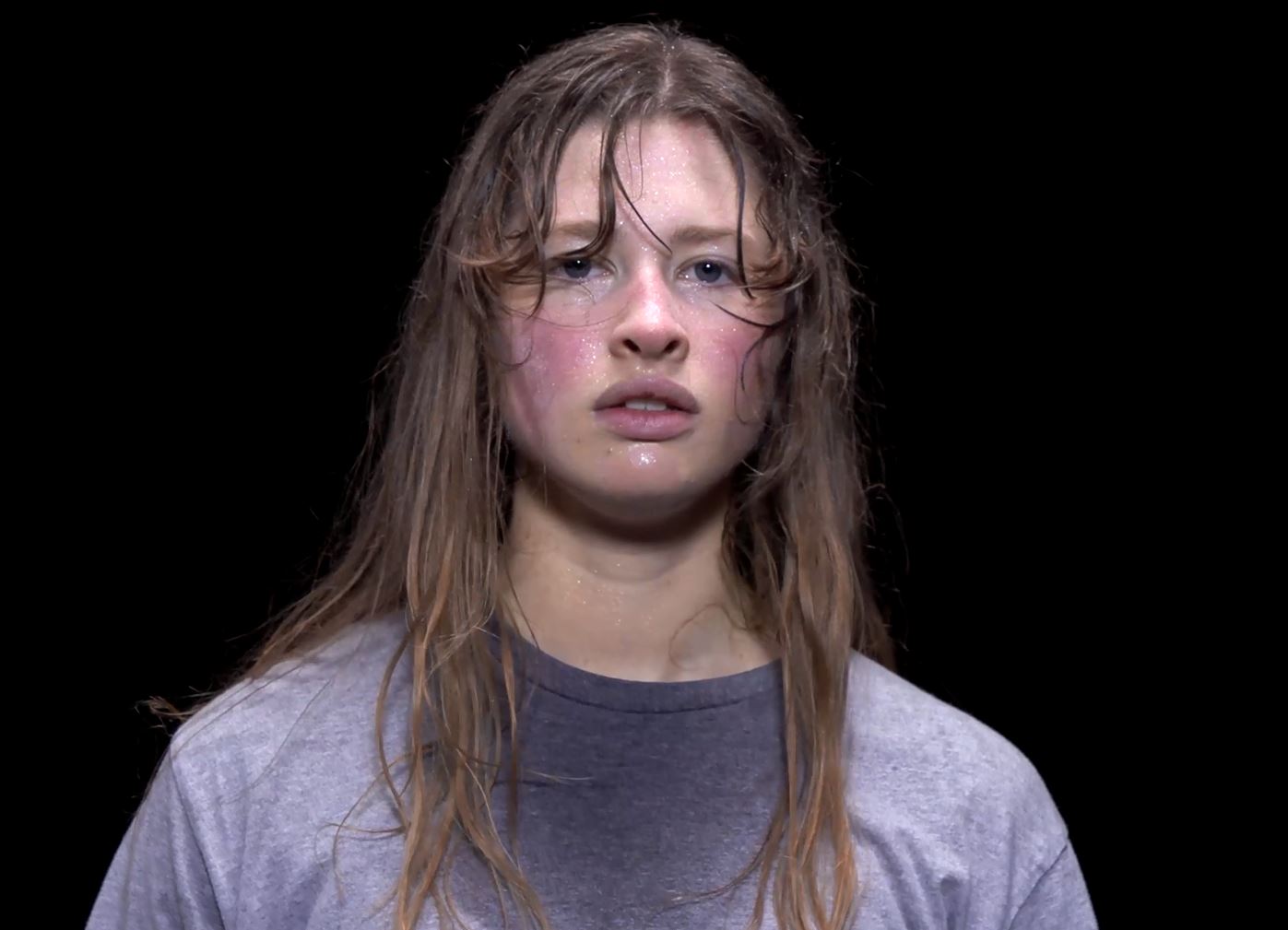 SPEDIDAM
SPEDIDAM is a collection and distribution company that manages the rights of performers to record, broadcast and reuse recorded performances